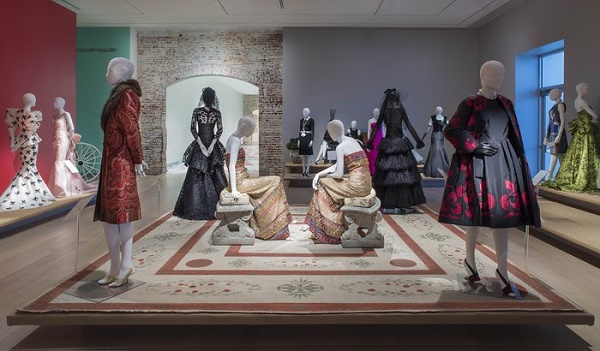 The first SCAD museum of art was opened 13 years ago on the Savannah Campus of Art and Design, and now they have opened a second museum. SCAD FASH, as its called is a brand new 10,000 square foot museum that will include a public gallery space and also a fashion lab and media library.

The first exhibit in the museum is an Oscar de la Renta one, which will feature some of his fashion work and also some of Peter Copping’s who took over when he passed away. The pieces will date back to the 1960’s and many celebrities have loaned their clothing to the exhibit, including Oprah, Taylor Swift, and Laura Bush.

The gallery will also show a short documentary called “Ovation for Oscar” which was created by SCAD students and alumni. The documentary gives a behind the scenes look into the process of building the exhibit. It was screened at the Cannes Film Festival this year.

Besides having the exhibits on display, the SCAD FASH will also do screening pretty regularly and also hold lectures that will be open to the general public.

The SCAD president and founder Paula Wallace spoke out about the new addition.

“SCAD FASH celebrates fashion as a universal language and garments as vehicles of identity. This museum focuses on the past, present and future of fashion design, connecting conceptual to historical principles of dress, whether ceremonial, celebratory or casual.”

Diane von Furstenberg is a huge advocate of everything that the SCAD family is doing both for students and for the general public.

“SCAD is an amazing university because it encourages students to design their own careers and express their own visions. As a continuation of this mission, I am confident that SCAD FASH will inspire students, and all those who visit, to inspire others in turn. It’s all about creating that cycle of empowerment.”

On the main campus SCAD already presented its first showing of the designer, with the show “Oscar de la Renta: His Legendary World of Style”.

The original SCAD has been open since 2002 and went though a revamp in 2011. It has won multiple awards and welcomes over 40,000 visitors each year.

Domenico De Sole was one of the founding donors to the SCAD Museum of Art. About the school he says:

“SCAD FASH is another example of SCAD’s commitment to fashion for both students and professionals alike. The museum demonstrates how this forward-thinking university continues to execute their vision to provide creative talent to this industry.”

Although SCAD FASH just opened, they are hard at work preparing future exhibits that will come next after the Oscar de la Renta one closes its doors. While the exhibits will be rotating in nature, SCAD FASH will keep a permanent collection that includes over 1,000 designs designs by designers like de la Renta, Yves Saint Laurent, and Hubert de Givenchy.