Fun Things to Know About Florida - The Lovely Planet

Fun Things to Know About Florida 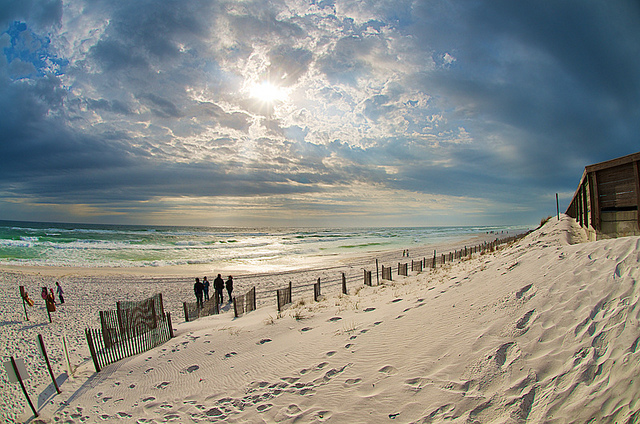 If you think of great weather when you think of Florida then you’re on the right track. The town of Key West actually has the highest average temperature in the country, which means that it’s pretty nice most of the time. That doesn’t mean that the state doesn’t get plenty of rain however, the storms are just generally warm ones and come and go quicker than in some other areas. The city of Clearwater actually gets more lightning strikes than anywhere else in the country.

Generally with all that hot weather the sand at the beaches gets pretty hot, but Florida has a beach where that isn’t the case. Siesta Key Beach has sand that is made from 99 percent pure quartz crystal, which does get hot to the feet. The beach has actually won an award for having the finest white sand in the world. Clearwater Beach also made it into the Guinness Book of World Records for having the “most days of sunshine”. Sounds like a pretty nice spot!

While some are better than other, there are more than enough beaches to explore in Florida and keep you busy for a while.  There are 663 miles of beaches in Florida, and 1,197 miles of coastline. In fact you can go to the inner most inland spot you can find in the state and you will never be more than 60 miles from the ocean. (Not that you would want to be.)

Because Florida is known for getting hurricanes, there is a law stating that all public buildings must have their doors on so that they open outward. This helps protect people from some of the strong winds that occur.

Florida is home to the Walt Disney Resort, which covers so much land that it is about the same size as San Francisco. At Disney’s Magic Kingdom the park welcomes about 17.2 million people each year, while Epcot welcomes about 10.9 million. Disney’s Hollywood Studios sees about 9.7 million visitors, while Disney’s Animal Kingdom sees about 9.5 million. About 6,000 cell phones end up in the lost and found each year at the parks.

Key West is one town that’s really good for a party, The town has more bars per capita than anywhere else in the country, and there is even one bar that even starts serving happy hour at 9 in the morning.

Another popular activity in Florida is golfing. There are over 1,000 golf courses in the state which is more than any other state in the country, and many professional golfers choose to live there because of it.

Miami was the first town to put ATM machines outside of the banks, which was an idea generated by the fact that they had so many rollerbladers who could not go inside the bank without putting normal shoes on. It’s obvious that outdoor activities reign in this sunny state.

4 thoughts on “Fun Things to Know About Florida”