Traditional dress of the Republic of South Africa

Traditional dress of the Republic of South Africa 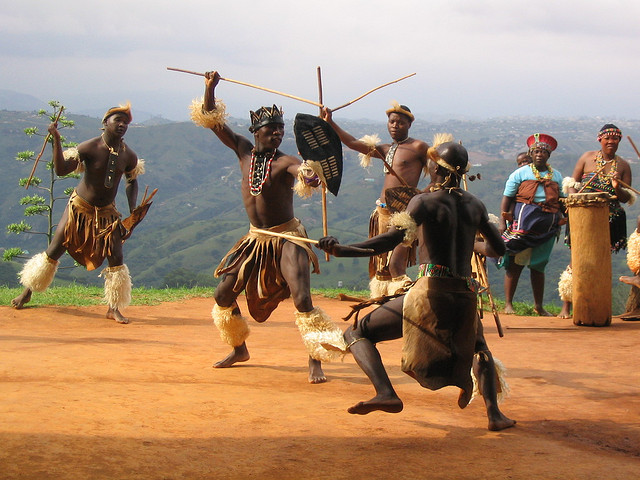 Vibrant and magnifying colored clothing is one of the most alluring segments of the great African heritage. We shall discuss in this article about the traditional outfits from the vast southern region of the African continent. Obviously the featured country will be the Republic of South Africa which is a large populous and multiethnic country mostly dominated by the people of Sub-Saharan ancestry. As the name describes itself, it is located on the southern tip of Africa. South Africa has the oldest human inhabitation background on the lovely planet as the traces of ancient archaeological and human fossils are discovered over there.

South Africa had the earliest settlers, the native herd people speaking the ancient Bantu language. Later the significant community is known as the Khosian people. But the most famous of all of them are the two substantial ethnic communities, who are living for centuries in this territory and are called as the Xhosa and Zulu peoples. Later history of South Africa tells about the white people domination who came from Europe and started their dwelling in this part of the world. Portuguese explorers attracted the other European nations and it remained the colony of the Netherlands and the Great Britain.

When we talk about the traditional dress of the Republic of South Africa, we’ll be mostly covering the tribal outfits worn by the notable ethnic groups of the country. Historians are not dead sure about the exact clothing customs of the ancient South Africans. It is really hard to keep alive the custom of wearing the pure traditional outfits, but on special occasions, the locals feel proud to wear their respective ethnic clothing. Many designers in South Africa are today involved in making the traditional dresses and people love to wear these exciting stuffs.

Variety of cloth materials are used like Shweshwe, Siswati prints and other fabrics to prepare the traditional wears. It is also common to observe the South Africans wearing the awesome traditional costumes adorned with modern touches in the festive events.

Let’s have a short background about the traditional South African costumes that were prepared mostly in the past with plants, animal skins and brayed hides. These were gradually replaced by the induction of imported woven fabrics and the changes occurred. There are easy distinctions in attires prevailing in this part of the lovely planet through which one can easily guess the status, age and ethnic association of a South African. Through dresses, the men and boys are also differentiated with women and girls and even married persons with the unmarried ones.

The largest ethnic groups of South Africa Zulu, who are actually considered the descendants of the Nguni tribes, live in the South African province, ‘KwaZulu-Natal’. They speak Zulu language which is the most widely spoken language in South Africa. The young kids and infants in Zulu tribes are usually seen with naked bodies. Sometimes only a string of grass is wrapped around the private parts. When the youngster reaches puberty, the genital area is covered by a piece of beadwork. A pubescent Zulu girl only wears a white cloth wrapped around her body which is a taboo for a married Zulu woman. Black colour dresses are worn by Zulu people in the mourning events. Very precisely, the traditional clothing of Zulus consists of unique varieties which they wear in festive occasions and in cultural ceremonies.

Let’s also highlight the feature of another prominent ethnic group, which are known as Swazi people. When Swazi boy becomes adult, he uses a traditional penile trip cover along with a kilt of animal tails or a calf skin hips coverings. The young girls wear white aprons like the Zulu girls during their childhood but when they become mature, they are further permitted to wear the red coloured garments and gradually are disallowed to wear the white ones. Spotted colored costumes are only for the married Swazi women.

In the nutshell, the women in South Africa have the traditional wear consisting of woven skirts, blankets, aprons and cloaks decorated with magnificent motifs. They also wear exotic jewelry which is prepared with stunning metal materials including copper, grasses and beads. In the past, there was no concept to hide the chest among the South African women but gradually with the encounters of European missionaries, the breasts were started to cover. The traditional breast covering of a South African woman is a wrap tucked under the arms, tied at back or around the neck.

The formal and ceremonial attire of traditional nature of almost all of the ethnic tribes are enormously refined and are usually embellished with leaves and other green plants. As mentioned earlier the women love to wear the ornaments made with grass garments including rings, wrist bands, anklets and bracelets. Women of some tribes also get ready in formal occasions with half naked bodies whitened with clay or powdered sandstones.

Western settlers introduced in their own dresses to the Afrikaans and the traditional European wear might be the tight bodice along with pointed fronts and lace behind for women. Other accessories were neckerchief, classic cap and linen collars. The different colored skirts were in run which were usually full and gathered or pleated around the waist. Military coats, pagoda hats, brightly colored kerchiefs, waistcoats and jackets were the classic accessories for men’s wear. The woolen blankets were replaced by typical cloaks by men. These were immensely popular in the urban areas of the country.

A Madiba shirt is a batik silk shirt, usually adorned in a bright and colourful print. The Madiba shirt was designed by Desré Buirski and first worn by the then newly elected president at the dress rehearsal of the opening of South Africa’s first democratic Parliament in May 1994. Mandela wore this style of shirt many times afterwards.

Traditional dress of the Republic of South Africa in it pure form is somehow existing in the remote ethnic colonies of the country. African block-patterned fabrics, wrapped around the body in artistic way are common in the tribe’s people even today.

One thought on “Traditional dress of the Republic of South Africa”